Featured Review: The impact of medications with anticholinergic effects on future problems with memory and thinking

In this recently published Cochrane review, the author team explored whether taking a certain type of medication could make older people more likely to develop dementia.

Discussing the review, Terry Quinn, senior author, said: "Almost every week we see a newspaper headline describing something new that allegedly causes or protects against dementia. These features attract attention as we all want to protect our brain health, but there is often little science behind the headlines.

There has been a lot of recent interest around whether certain prescribed medications can cause dementia. A class of medication frequently implicated in causing dementia are the ‘anticholinergics’. Medications with anticholinergic effects are commonly prescribed for conditions like hayfever, asthma, and urinary problems.

Reviews that look at whether a factor can predict future health require a different approach to the standard systematic review. These prognosis reviews are a relatively new method for Cochrane but are incredibly important for the dementia field.

What was the aim of this review?

We aimed to investigate if older people who have no problems with memory or thinking are more likely to develop dementia when prescribed anticholinergic medicines than people who are not prescribed these medicines. 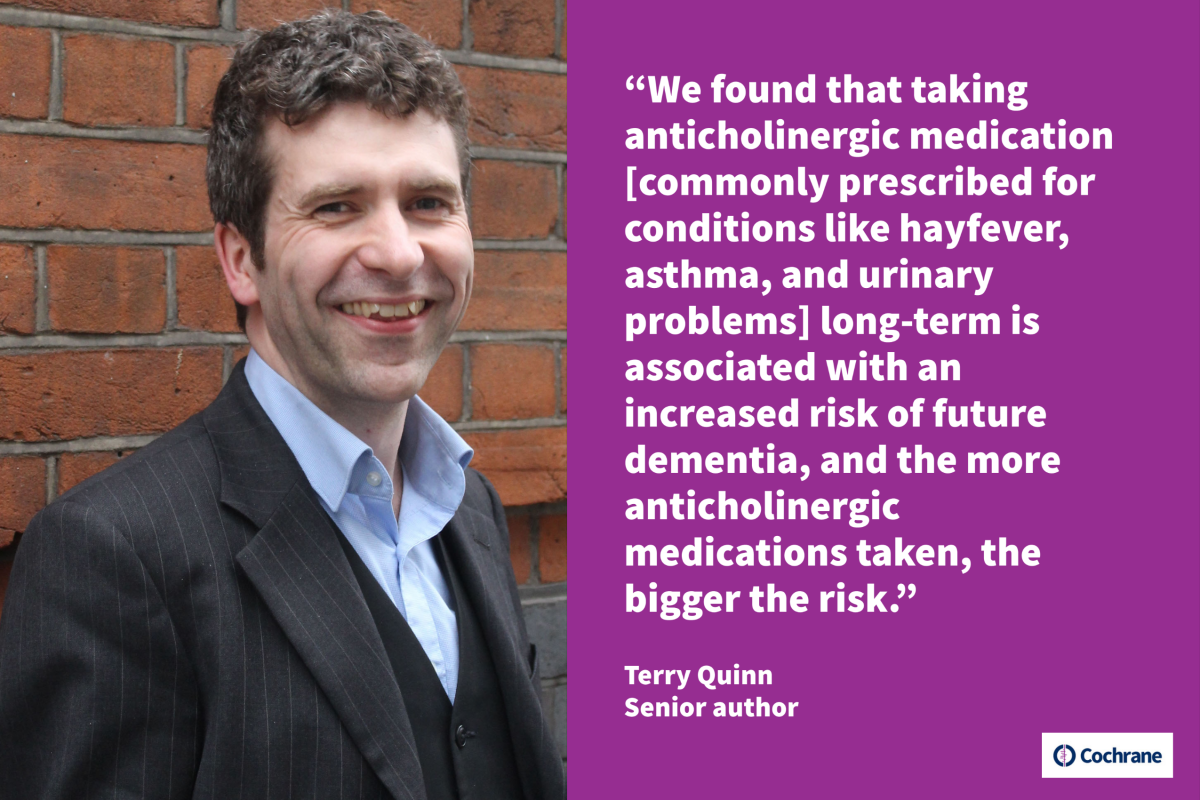 What was studied in the review?

There are more than 40 million older people worldwide living with dementia. These numbers are expected to rise to over 100 million by 2050 and at present there are very limited treatment options available. Therefore, it is important to identify factors that may increase the risk of dementia.

Because the cholinergic system in the brain plays an important role in learning and memory, there are theoretical reasons to believe that medications with anticholinergic effects could cause future dementia. Research has suggested that these medications may have unintended effects on memory and thinking, potentially resulting in dementia. If this is the case, one way to reduce the numbers of older people who develop dementia may be to avoid prescribing these medicines. Many commonly used medications have anticholinergic effects, for example medications for hay fever, insomnia (difficulty getting to sleep or staying asleep for long enough to feel refreshed), and depression.

In this review, the author team investigated the link between anticholinergic medicines, as measured by various measurement scales, and future dementia.

What were the main results of the review?

Review authors found 25 studies, including 968,428 people aged 50 years or more. Despite the relatively large number of studies, differences in design and methods only allowed authors to combine a few of them in analyses. They found that there is a consistent link between use of anticholinergic medicines and risk of future dementia. They cannot say if these medicines play a causal role; however, if they do, taking these medicines could potentially double a person's risk of dementia.

How up to date was this review?

The authors searched for studies published up to 24 March 2021.